iPhone Accessories: Swivl motion tracker base for self video

I’m sure you know just how difficult it is to capture yourself on video with your smartphone especially if you move around a lot and keep going out of the scene, but if you own and iOS smartphone there is a little accessory that can take care of that self videoing problem for you, called Swivl.

Swivl for the iPhone 4S, iPhone 4 and iPod Touch 4th-gen follows the users every move enabling the user to move freely around and the Swivl base will follow you no matter what keeping you in the frame so no more needing to ask a friend to take the video.

Swivl for iOS devices features horizontal and vertical following capacity meaning you can place your iPhone upright or sideways and it will still keep you in the frame no matter where you move, and can also be used with any tripod mountable video camera.

Swivl for iOS devices also set you free by coming complete with a wireless remote control for starting and stopping the recording.

And we have a little video of the Swivl motion tracker base, which also charges your iOS device at the same time, for your viewing pleasure below courtesy of the guys over at MacRumors, and furthermore a prototype of Swivl is set to be shown off during CES 2012.

So if you wish to be able to video you and your friend with your iPhone without having to have someone else hold you smartphone, head on down and check out the footage, and if you like the accessory you can pre-order one right now at a price of $159.99 and is expect to release early in 2012…enjoy. 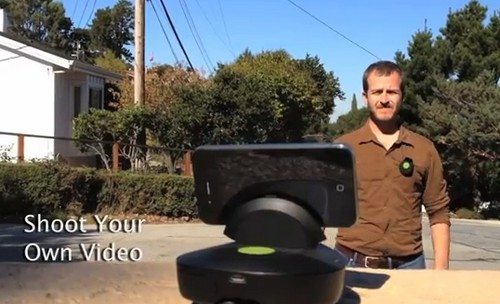