According to the guys over at Unwired View, as of the 12th of this month Google is running a contest on Twitter, no doubt to promote the arrival of the upcoming Galaxy Nexus whereby those that enter are required to solve puzzles, essay questions, photo challenges and the like.

Furthermore, if you fancy your chances at winning a Samsung Galaxy Nexus, but aren’t sure whether where you live is covered by the contest as these things are usual confined to residents of the US, well you are in luck as you don’t have to reside in the United States to win as you can also live in the United Kingdom, Australia, Canada, Germany, France, Spain, the Netherlands, Singapore, South Korea, Hong Kong and Japan.

Apparently the Google guys are giving away seven of the Android Ice Cream Sandwich smartphones with the contest coming to an end on the 21st of November, which could also mean that the Samsung Galaxy Nexus just might release on US soil on that particular date.

Anyway, as they say, you’ve got to be in it to win it, so why not give it a shot, but make sure you check out all the rules of the contest before hand, which you can do by hitting up here (PDF). So will you be giving the Samsung Galaxy Nexus Twitter giveaway a shot? 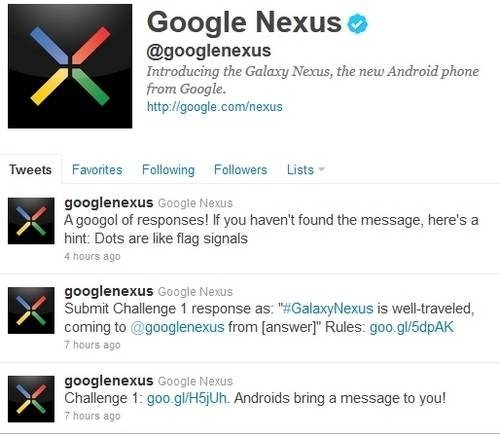