If you are in the market for a tablet this festive season other than an Apple iPad or Android slate of course, then you may just like to hear that the BlackBerry PlayBook is said to be seeing quite a price drop in a festive season fire sale on Research In Motion’s home turf.

According to an article over on Apple Insider, the BlackBerry PlayBook will be offered by Staples in Canada at a reduced price as of this Friday the 18th of November and will offer he 16GB BlackBerry slate for $199, the 32GB model for $299 and the 64GB BlackBerry Playbook for $399.

The guys know Staples will be offering the BlackBerry PlayBook in a fire sale this festive season as they received a photo of an advert, which was sent in by an anonymous reader, and shows that the Staples BlackBerry PlayBook sale will continue until the 1st of next month.

The price slash on the BlackBerry PlayBook brings the slate more in line with such tablets as the new Amazon Kindle Fire and Barnes & Noble Nook tablet, so the PlayBook just might become an attractive deal if you are in the market for a new tablet.

So the question to our readers in Canada and the US is, will a reduction in price tempt you to purchase the BlackBerry PlayBook over rival tablets this Christmas? 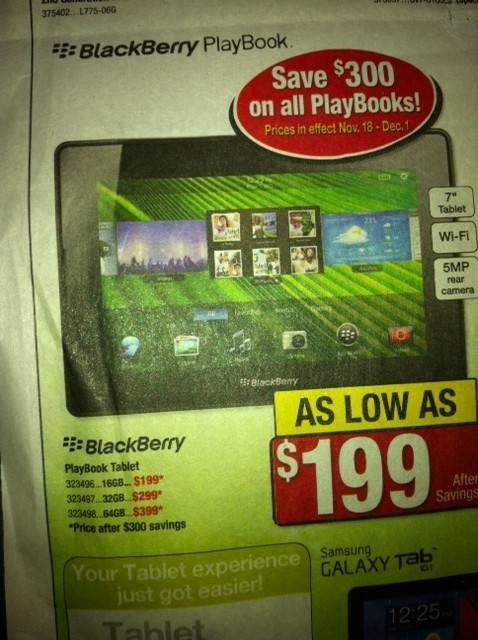