Apparently the new Android tablet doesn’t fall foul of the ban in Germany and as such is now in German stores, and thanks to the guys over at Slash Gear we have a review video of the Samsung Galaxy Tab 10.1N for your viewing pleasure below courtesy of the NewGadgetE YouTube page.

Apparently the big difference between the Galaxy Tab 10.1 and the new Galaxy Tab 10.1N is in the bezel, which Apple said that this was the distinctive appearance with the Apple iPad, and thus Samsung has made the 10.1N bezel somewhat wider on 2 edges along with moving the speakers to face forwards rather than sideways.

Apparently old Sammy also took the opportunity to add Bluetooth 3.0 to the Galaxy Tab 10.1N, and has also repositioned the logo so it now sits centre beneath the display.

Word is Apple hasn’t made any comment about the redesigned Galaxy Tab 10.1N, but if the Android tablet can get past that German ban then perhaps the 10.1N may also get round the Samsung Galaxy Tab 10.1 ban in Australia, guess well have to wait and see on that one.

That’s it, all you need do now is head on down to hit that play button and check out the review footage of the new Samsung Galaxy Tab 10.1N…enjoy. 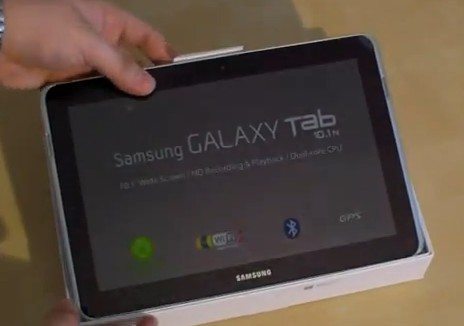