Droid RAZR and HTC Rezound hit a penny on Amazon

Well now, if you are in the good old US of A and looking for an exceptional deal on one of the latest Android smartphone to hit the mobile space in the run up to Christmas it just might pay you to check out Amazon as they are running a deal on both recently released Motorola Droid RAZR and HTC Rezound.

According to the guys over at Phone Arena, if potential Droid RAZR and HTC Rezound customers hit up Amazon they will find that they can pick up either smartphone for the very attractive price of just one penny, Droid RAZR here and HTC Rezound here.

This price slash on both the Android 2.3 Gingerbread smartphones applied to new Verizon customers when signing on for the usual two-year agreement, are in stock and ships within 24 hours for free.

Furthermore, apparently all Verizon, AT&T and Sprint handset are being offered for just that single penny by Amazon up until the 28th of the month or until supplies run out, so if you don’t want the Droid RAZR or HTC Rezound perhaps Amazon has another handset that will catch your eye in this penny giveaway. 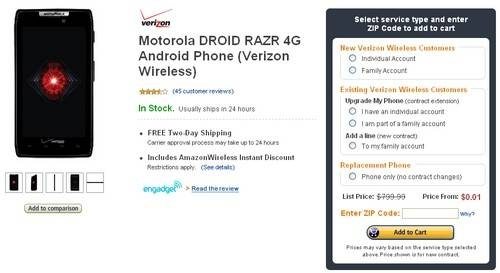