It’s somewhat hard to believe that there are still Android devices out there that are languishing on the Android Froyo OS when we now have an Android Ice Cream Sandwich handset out in the public arena, but there are, and one such device is the Samsung Droid Charge, however it appears that Droid Charge owner’s long wait to get updated to Gingerbread is finally going to happen.

According to the guys over at Ubergizmo, by way of Droid-life, the Samsung Droid Charge, which was one of the Big Red’s first 4G LTE enabled smartphones should start receiving the Android 2.3 Gingerbread update as of next Tuesday.

The Droid-life guys say that Verizon has now confirmed that the Android 2.3 Gingerbread update for the Samsung Droid Charge will roll out to devices as of the 29th of November.

Thus for those Samsung Droid Charge owners that haven’t gone the root and custom ROM route will now be able soon be able to play along with Gingerbread on their handset, and hopefully the wait to get further updates for their smartphone wont take as long.

Hopefully the Gingerbread update roll out will go according to schedule and will be more or less bug free, but if you do happen to grab the update on the 29th of the month and find any problems we’d like you to let us know by posting to our comments area below, but hopefully all will go smoothly. 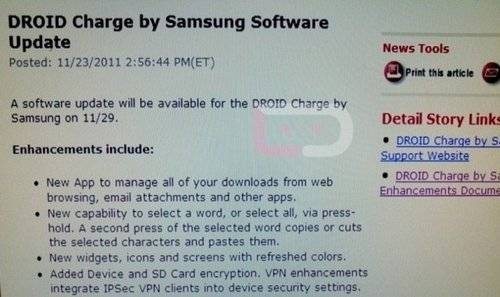