Galaxy Nexus unlocked available in US from Expansys

If you are in the good old US of A and don’t wish to wait until the rumoured December the 8th for Verizon to deliver the new Android Ice Cream Sandwich toting Samsung Galaxy Nexus, you can now get your hands on the Galaxy Nexus as an unlocked smartphone in America if you are prepared to pay the price of course.

According to the guys over at Engadget, those eager Americans that wish to play with the Samsung Galaxy Nexus before the Big Red officially release the much talked about handset they can do so by hitting up Expansys.

Where you can obtain an unlocked version of the Samsung Galaxy Nexus as long as you are prepared to part with a rather hefty $750, and the guys have independently confirmed that orders placed are indeed shipping.

If you opt for the unlocked Samsung Galaxy Nexus from Expansys the Android 4.0 smartphone will play nice on both AT&T and T-Mobile 3G networks and is a 16GB GSM HSPA+ device.

So there you have it, if you really want the Samsung Galaxy Nexus right now you can do so, so will you be opting for the unlocked Galaxy Nexus rather than wait for the handset to release on Verizon, or will you simply wait for that official release? 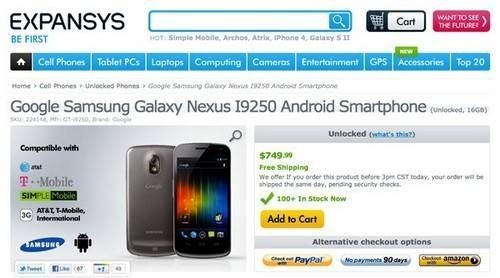