The Asus Eee Pad Transformer Prime footage comes our way courtesy of the guys over at Ubergizmo and by way of Ritchies Room, and delivers an almost three minute look at the new Android Honeycomb slate.

The Eee Pad Transformer Prime is the first Android tablet to pack a quad core processor, and comes in thinner and lighter than the Apple iPad 2 coming in at just 8.3mm thick and weighing 586 grams, and as old Sammy is out of the tablet confrontation stakes in some areas of the world, the guys say the Asus Eee Pad Transformer Prime will most likely be one of the main contenders against the iPad 2.

Spec remainder for the Transformer Prime, 10.1-inch Super IPS+ touch screen with Corning Gorilla glass, an 8 megapixel rear camera, 1.2 megapixel front camera, 1080p video, LED flash, SonicMaster audio enhancement, that Tegra 3 quad core processor that runs at 1.3GHz when all cores are active and 1.4GHz when only a single core is used, 32GB and 64GB versions with both packing microSD expansion to ad another 32GB, HDMI port and 3.5mm jack, and also has a keyboard dock just like the original.

That’s enough from me, head on down and mash that play button to check out this first look at the new Asus Eee Pad Transformer Prime…enjoy. 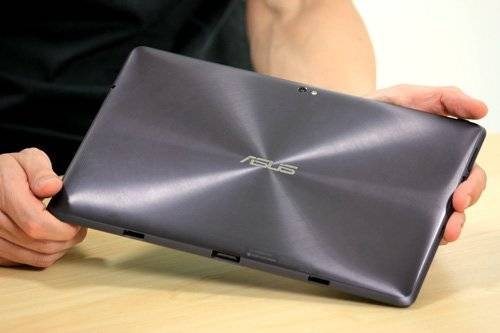