For the iOS football fans out there, there is a new iOS app been released by OneUp Games that takes their football game to the next level with live social gaming enhancing sports viewing for both diahrd and casual NFL fans.

The Football Connect 1.2 app for the iPhone, iPod Touch and Apple iPad, is based on real-time game events enabling fans to compete against friends for point, prizes and rewards and interact live whilst watching any NFL game whether at the stadium or on the television.

With the Football Connect 1.2 iOS app the user can play instantly by signing in via their Facebook Connect account and is a bingo inspired social game based on real-time game events and custom moves during NFL games.

Featuring 32 NFL teams, players begin with random digital game cards containing such plays as interceptions, touchdowns, fumbles, first downs and such and use strategy along with game knowledge to win more points via swapping the events with a specific player event or play safe by picking a team.

The CEO of OneUp Games, Daren Trousdell says the great thing with Football Connect is fans of varying ages and interest levels can have fun and compete whilst diehard fans will make strategy swaps to outsmart others, casual fans can enjoy watching games and interact with friends.

The Football Connect 1.2 app for iOS devices is available as a free download to your chosen device by hitting up iTunes. 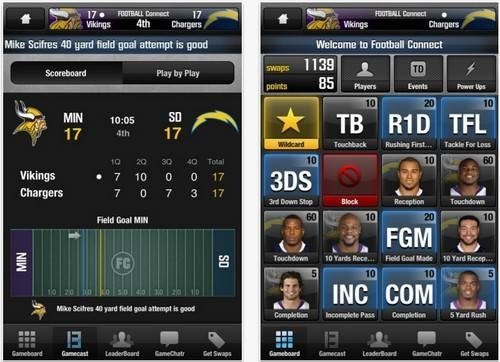