The BlackBerry PlayBook tablet hasn’t been doing too well in the mobile space for Research In Motion; however there is now something that just might make the BlackBerry slate a little more attractive, the ability to jailbreak the device, as the DingleBerry jailbreak tool, the first of its kind has now hit the net waves.

According to the guys over at Redmond Pie, and as those in the jailbreak scene will know, jailbreaking a device can deliver advantages such as root access so the user can run code and unsigned apps, and jailbreaking the BlackBerry PlayBook would essentially deliver a wide range of possibilities to the slate.

Much like Android, jailbreaking the closed BlackBerry Playbook opens the gates to modders to deliver custom ROMs which will also enable the removal and addition of features and in cases make the QNX experience better for most.

Of course if the modders pick up the DingleBerry jailbreak and open up the BlackBerry PlayBook we could possible seen the tablet playing along with Android, and well, as the source code for Android Ice Cream Sandwich is now available the possibility of having Android 4.0 playing nice on the BlackBerry PlayBook could be a reality.

If you are a modder, and would like to have a go, the DingleBerry jailbreak tool is available for Windows only at this point, but a Mac version is apparently coming soon, and you can download the necessary from the DingleBerry website. 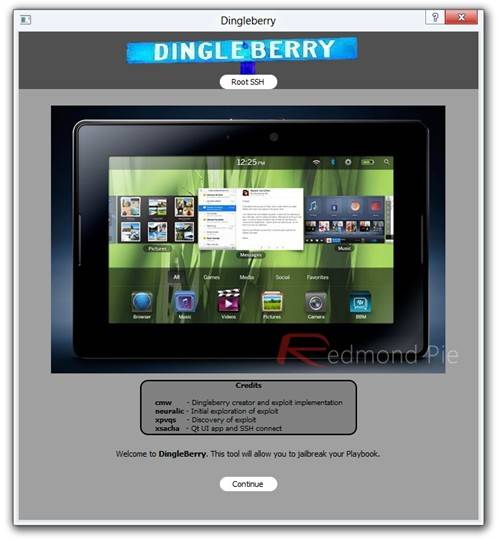