Let’s face it there has always been rivalry between the top two US carriers and usually the Big Red comes out on top so it isn’t really surprising that a recent survey found AT&T lagging behind Verizon once again, much like they did previously in 2010 with AT&T relegated to the lowly place of last position.

This year it’s the same really as according to an article over on Apple Insider, the annual survey of US carriers performed by Consumer Reports places Verizon in poll position and rival AT&T in last position amongst the biggest four US carriers.

The 2010 survey found that AT&T performed poorly across the board and receiving the worst ratings for customer support, service and value with the exception of texting, and apparently AT&T hasn’t really improved this year whilst Verizon maintains first place.

Sprint followed closely behind the Big Red whilst third place was grabbed by T-Mobile, which according to the report said they rated “significantly better” than rival AT&T, perhaps that’s why AT&T wants to merge with T-Mobile so bad.

The Consumer Reports survey took in over 66,000 subscribers and asked questions about their experience, customer support and service with their US carrier and the complete report will be available in Jan 2012 via the Consumer Reports magazine.

Consumer Reports electronics editor Paul Reynolds said that the survey shows that subscribers to smaller standard service and prepaid providers are overall the happiest with their mobile phone service although these are not for everyone and major carriers are still leading options for many customers and found it ranged widely in just how well the carriers satisfied their customers. 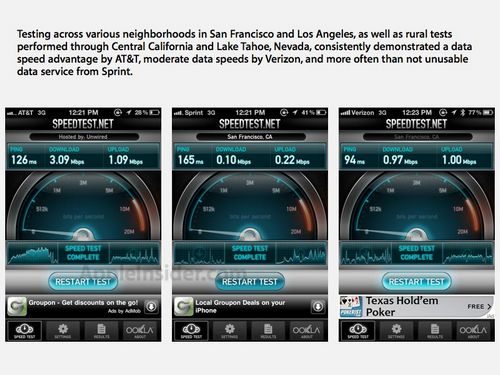