I’m sure everyone over in the good old US of A waiting for Verizon to get their finger out and release the Samsung Galaxy Nexus is becoming somewhat fed up with the wait for the Big Red to deliver the first Android Ice Cream Sandwich packing device, but it appears at least some have been luckily enough to get hold of the smartphone ahead of schedule.

It appears some Best Buy locations didn’t receive the don’t sell yet memo and went ahead and released the Android 4.0 handset for purchase with a guy called Sean Bates managing to nab the Verizon version of the Samsung Galaxy Nexus before it officially goes on release and posted some pictures.

Apparently at least three punters managed to purchase the Verizon Galaxy Nexus at Best Buy; however other posted report that when they tried the same they were all turned down and weren’t given any ETA on just when they would be able to nap up the handset.

Thus it would appear, apart from the odd few being made available due to a Best Buy mistake the long wait for the Samsung Galaxy Nexus to arrive on Verizon continues, but I guess you could always pop over to your local Best Buy and try to sweet talk them into letting you have one, who knows, you might be successful. 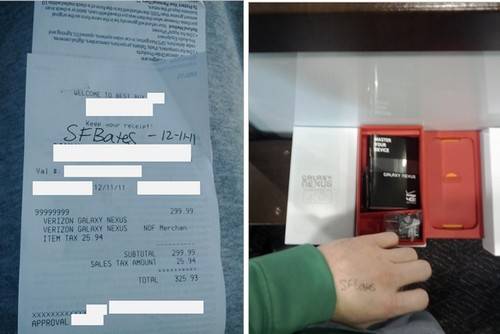