If you have been patiently awaiting the arrival of the Motorola Droid 4, as much like the Samsung Galaxy Nexus, the Big Red hasn’t yet got round to announcing just when the Droid 4 will release to the public arena, apparently the Android handset should arrive before the month is out, and now the Droid 4 has popped up on DroidDoes.

According to the guys over at Droid-life, the dual core 4G LTE enabled Motorola Droid 4 has now shown up on the DroidDoes.com landing page, which could herald the handsets imminent release. Something I’m sure all Droid 4 wannabee owners are happy to hear.

Apparently if you hit up the landing page and then hit the Droid 3 page and scroll down to the bottom you will see the Droid 4 logo and apparently the guys dug further and discovered an image of the smartphone matched with specs and feature, which can be seen below.

As previously reported, it was expected that the Motorola Droid 4 would make an appearance as of the 8tyh of this month, but obviously that particular release didn’t materialise, so currently just when the Droid 4 will actually come out to play is still up in the air.

Once it does arrive though you can expect a stylish RAZR design, 4G LTE, 5-row Physical keyboard, 1.2GHz dual-core processor, a 4-inch qHD screen but not sure if it will be LCD or AMOLED, DROID RAZR design styling, 8-megapixel camera on the back and a front camera for video calling, talk time up to 12.5 hours, memory card slot, 1785 mAh battery. 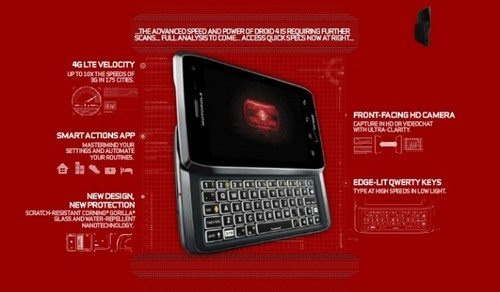 2 thoughts on “Droid 4 shows up at DroidDoes.com, release imminent”