Looks like it’s going to be a good Christmas for employees of Google as word has it the Google guys are giving their employees an extra special Christmas present this year in the form of a free Samsung Galaxy Nexus, but no ordinary Galaxy Nexus as this particular version has been customised.

According to the guys over at The Next Web, Samsung and Google are giving the customised Android Ice Cream Sandwich handsets to their workers as a Christmas thank you.

The customisation of the Samsung Galaxy Nexus being given away features a back cover that is adorned with various Android and Google+ icons,(image below) and it has been confirmed that both Google’s London and Zurich offices are handing out the customised Galaxy Nexus handsets to employees.

It isn’t clear on whether all Google employees will gain the free customised version of the Android 4.0 smartphone, but presumably they will and the The Next Web guys have contacted Google to find out and will update once they receive a reply.

No word on whether there is any other customisation with the Samsung Galaxy Nexus Google employee Christmas giveaway other than that back cover, but no doubt sooner or later one will find its way into the hands of a reviewer or end up being offered on eBay for the highest bid, so we’ll probably find out then.

Have to say, it’s a nice touch by Google and Samsung to give employees a free ICS handset with customisation for Christmas don’t you agree? 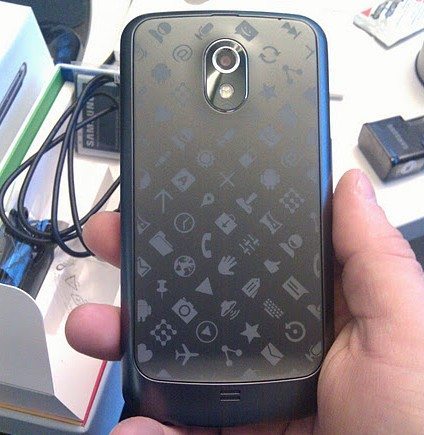