The big festive day is fast approaching and come Christmas Eve every kid wants to know where Santa is to see just how close he is to where they live, and if you have an iOS device you can track Santa’s whereabouts on Christmas Eve along with counting down to Christmas, and even photo Santa coming down you chimney with the Santa’s Big Helper: 9 Christmas Apps in 1.

Santa’s Big Helper: 9 Christmas Apps in 1for the iPhone, iPod Touch and Apple iPad, as the title indicates features 9 apps in 1 and includes, Santa Tracker enabling users to track Santa on Christmas Eve, Christmas Countdown so the kids can count down the number of sleeps before the big day, The World Famous Patent Pending Elf Camera, whereby you can use images of your home to create a video of Santa coming down your chimney and appear as an elf update on Christmas morning.

Santa’s Big Helper app for iOS also includes Elf Updates; with Santa’s elf helper Dozey-Toes sends video updates to your home so you know what is going on in the great white north, a Naughty/Nice list, which enables your child to keep track on how they have behaved in the run up to Christmas although controlled and password protected by parents.

Then there’s Letters to Santa that enables the kids to write to Santa listing their gift preferences and can be shared via email and checked by parents, Ask and Alf app that lets the user ask those important questions by directly communicating with an elf.

There is also the Magic Compass app, which using the iPhone compass points directly at the North Pole and lets you hear the elves and Santa at work, and lastly the Christmas Sound Board that puts the sound of Christmas right at your fingertips.

If you have children and need to keep them entertained or put them in the Christmas spirit then the Santa’s Big Helper: 9 Christmas Apps in 1 could be the app you are looking for, and can be downloaded to your chosen device from iTunes at a cost of just $0.99. 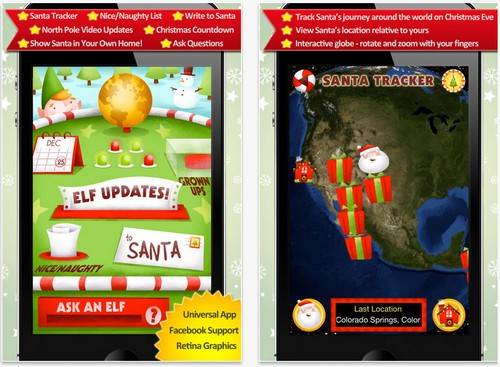