Ah the wonderful would of the concept phone maker, it seems a shame that most concept phone that hit the net waves never rally make it to the production stages, as some really bring a newness to the smartphone arena, much like this latest Android concept phone called the Crescent Supernova.

The Crescent Supernova is 4.8-inches in height with a 1080p screen and considered even an evolution over the popular Samsung Galaxy Nexus.

Other specifications on the Crescent Supernova Android 4.0 handset are, a whopping 18 megapixel camera, no mention of a front facing camera though, 600MB memory, 100GB internal storage, a 1GHz dual core Snapdragon processor, the latest Bluetooth tech and everything including charging, sync/transfer, headphones and such done via WiFi.

Apparently the Crescent Supernova concept phone also sports a secondary LCD display on its rear to display battery power along with some status details and all whilst being an extremely thin handset.

The Crescent Supernova concept phone has been designed by Jonathan De Jesus, and the poster of the article says they seen the Crescent Supernova as an elegant evolution ICS device for 2012, and something that could be picked up by the likes of Samsung, Motorola or HTC.

So what do you think, would the Crescent Supernova Android 4.0 smartphone float your boat if it every made it to production and eventually hit the streets? 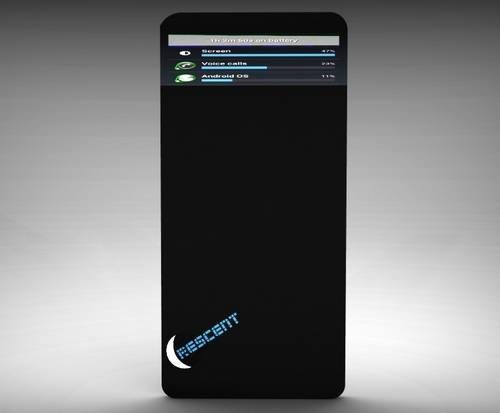