No doubt many of the Android faithful over in the good old US of A are still patiently waiting to get their mitts on the next Droid smartphone out of the Motorola camp to hit the Big Red Network, namely the Motorola Droid 4, and it looks like that rumoured 22nd of December release date is still a possibility.

According to the guys over at Ubergizmo the guys over at Droid-life have got their hands on an internal document that actually shows the Motorola Droid 4 as having that December 22nd release schedule, which of course is tomorrow (image below).

Having said that, Verizon hasn’t even got around to officially announcing the Android 4G LTE smartphone, but then as it seems the Big Red likes cutting things to the bone when it comes to official announcements they could do the business later today.

Of course with no confirmation from Verizon the Motorola Droid 4 may not make an appearance tomorrow, but if the Big Red wants to get it out before Christmas there isn’t a great deal of time left.

Are you looking forward to picking up the Motorola Droid 4 if it surfaces for purchase tomorrow, or will you hold out for the smartphone even if it means waiting until after Christmas? 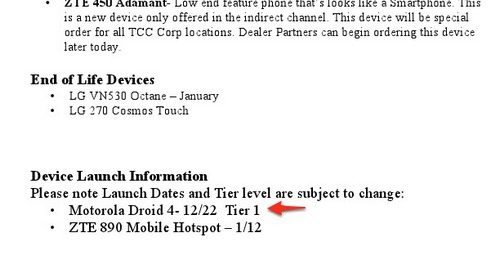