Joining the ranks of Action Man, Barbie’s Ken, Transformers Optimus Prime, and the abundance of action heroes immortalised with an action figure is the late chief of Apple, Steve Jobs. Yes folks those who admired Steve can now purchase their very own miniature Steve Jobs doll to grace their mantelpiece or desktop or wherever.

According to the guys over on Slash Gear by way of Forbes, the 12-inch Steve Jobs action figure is made by a company called Inicons and is apparently extremely realistic.

The Steve Jobs action figure obviously features Jobs trademark beard and round glasses the same as the Apple icon wore, and even includes a tiny pair of Jobs’ New Balance 992 sneakers.

According to the makers website you’ll get one realistic “head sculpt,” a “highly articulated body,” three pairs of hands, two pairs of glasses, one pair of blue jeans and one tiny black turtleneck, presumably the glasses and hands can be lost so you get extras.

According to the image on their website, the 12-inch replica does look uncannily like the late iPhone guru, but they do say that with the final product “appearance and colours may vary.”

Not the type of thing I would personally want, but I do have a few iOS friends out there that I am sure would only be too pleased to own their very own action figure of Steve Jobs, would you? 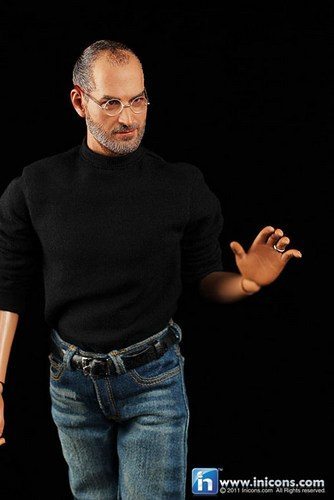 One thought on “Steve Jobs immortalised with action figure”