Currently if you are over in the good old US of A and want to play along with Android Ice Cream Sandwich on the Samsung Galaxy Nexus you have to go with Verizon Wireless, however it would appear that the Galaxy Nexus could well be making its way to another US carrier in the not too distant future.

Word of an LTE Samsung Galaxy Nexus possible for Sprint comes via an advert mix up according to the guys over at Ubergizmo by way of Cnet, apparently the advert was published prematurely on one of Cnet’s CES 2012 pages.

The advert in question shows an image of the Samsung Galaxy Nexus with the line, “introducing Galaxy Nexus, the first 4G LTE phone from Sprint.”

Of course when contacted, a Sprint spokesperson wouldn’t comment either way so it isn’t clear whether the advert does in fact mean Sprint will be unveiling the Sprint Galaxy Nexus LTE during CES 2012.

So if Sprint does out the Samsung Galaxy Nexus with 4G LTE during the event to play nice on their 4G network which they are rolling out sometime in the first half of the year, will you be hoping to snap up the Android 4.0 handset on Sprint once it becomes available?

Hopefully more news on the Sprint Samsung Galaxy Nexus LTE or whatever Sprint decide to call it will surface during CES 2012 and of course if it does we will pass it along. 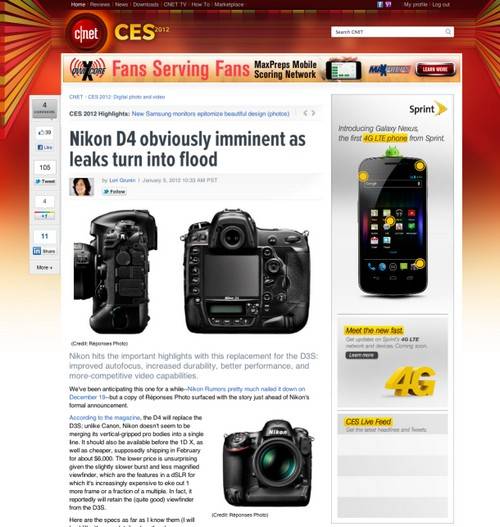