We enter the realms of the concept phone once again today with a new Android concept phone that well like most concept device probably won’t make it out into the big wide public arena, but it is nice to see what the designers can come up with, and this one is a doozy, the next Google smartphone and playing along with the next Android operating system rather than Android Ice Cream Sandwich.

The Google Nexus Ultima concept has been designed by Bob Freking and comes to our attention courtesy of the guys over at Concept Phones, and this Android smartphone is the first handset to be made by a four major manufacturers, Samsung, HTC, Motorola and LG.

So what does the Google Nexus Ultima offer the user? Well the smartphone would come out packing the Android Jellybean operating system along with combining ToucWiz, HTC Sense, the HTC Optimus UI and MotoBlur.

Design wise the rear of the Android handset would be made of Kevlar and feature a steel frame and all wrapped up in a 9mm thick housing.

Furthermore there would also be an extreme version of the Google Nexus Ultima that would sport a Super AMOLED HD NOVA touch screen along with a 20megapixel rear camera and 5 megapixel front camera along with bullet-proof glass and also being waterproof.

Of course one must remember that the Google Nexus Ultima is simply a concept device, but if it were to become the real deal would you be clambering to get one? 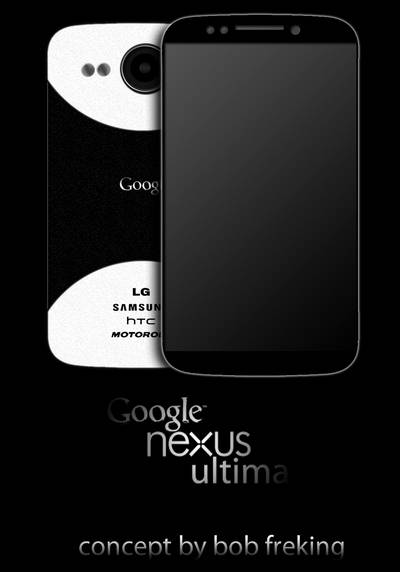