If you are a lover of arcade style gaming accessories for your iPhone, iPod touch or Apple iPad you might like to know that Ion Audio has now announced three new iCade models to play along with your iOS device, which are the iCade Core, the iCade Jr and the iCade Mobile.

According to the guys over at iDownload Blog, the first of the bunchy, the iCade Core is a stripped down version of the original iCade for the Apple iPad, but can now be used with any iOS device with the iCade Core communicating between devices via Bluetooth, but in order to keep anll things powered you’ll need to use the 30-pin dock connector as well.

Then there’s the iCore Jr, which is a smaller model and designed for use with the iPhone and iPod Touch, and sports four face buttons along with a stick for controlling whilst on the rear side are four more buttons and a dock connector. Price wise the guys say the iCore Jr is expected to have a price tag of 49-bucks once it hits shelves in the spring.

The third model is the iCade Mobile, a device that apparently wraps around your iPhone or iPod Touch to get a more control pad feel, which should make the device ideal for when out and about and of course uses Bluetooth. Price wise the iCase Mobile is expected to surface commanding a price tag of 80-bucks.

We have a couple of videos for your viewing pleasure below, the first of the iCade Core courtesy of IonAudio and the second of the iCade Mobile courtesy of the guys over at Engadget, so don’t foregt to check them out…enjoy. 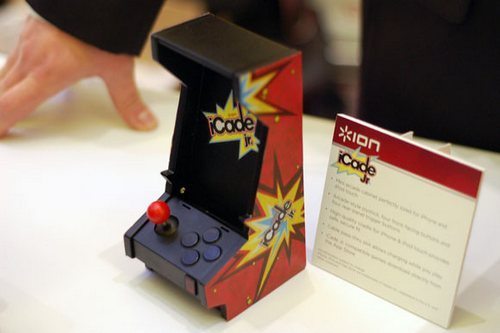