During CES 2012 Sony Ericsson had a new accessory to show off in the form of a new Bluetooth watch that can apparently play nicely with most Android smartphones running Android 2.1 and above and is called the Sony SmartWatch, so one can assume that Sony has now dropped the Ericsson part of the name.

The guys over at Engadget were on hand at the event to have a look at the Sony SmartWatch, which is the successor to the LiveView and can apparently be detached from its rather bland strap and transplanted to any other watchstrap if you prefer.

The device itself is connected to your handset via Bluetooth and can answer calls, play music, act as a notifier, and allows the user to check on their social networks such as Twitter and Facebook and all done by a new app running on your phone and controlling the SmartWatch.

With typical usage the battery life of the Sony SmartWatch is said to last four days, which seems very reasonable to me, the device sports a capacitive touch screen that works well although when asleep you need to tap the side button to wake it up.

As for that rubbery strap, Sony says there is several colour options available on launch, which should be sometime this quarter, and the Sony SmartWatch should command a price tag of about $149.

So is the Sony SmartWatch a practical device? Personally I have to ask why would anyone want a SmartWatch if they have a smartphone to do all they need anyway, perhaps it’s just a lazy mans way of not having to take his phone out of his pocket, and to me it does look to be a bit of a tacky looking device that could do with a bit more polishing, what do you think?

We have a couple of videos of the Sony SmartWatch for your viewing consideration below, one from the guys over at Mobile Syrup and another from Solider Knows Best, so don’t forget to check those out, and feel free to let us know id the Sony SmartWatch is a device for you or not…enjoy. 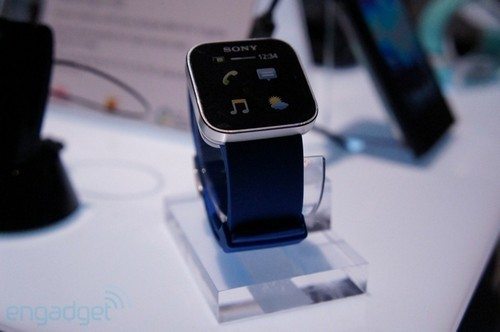