Lenovo has a new Android smartphone on their hands called the Lenovo K800, a smartphone that is apparently the first Intel powered smartphone with the handset sporting an Intel Medfield processor, and we have a nice little Lenovo K800 hands-on video for your viewing consideration below so you can check out what the device offers.

The Lenovo K800 hands-on footage comes our way courtesy of the guys over at Engadget who managed to get a little hands-on playtime with the new Android smartphone at the ShowStoppers event at CES 2012 and delivers an almost three minute look at the device along with a quick side-by-side size comparison with the Samsung Galaxy Note.

Spec wise the Lenovo K800 is an Android 2.3 Gingerbread smartphone with a 4.5-inch 720p touch screen, an 8 megapixel camera with a max sensitivity of ISO 3200, front facing camera, WiFi, Bluetooth 3.0, GPS, and that 1.6GHz Intel Medfield processor of course and a 1900mAh battery, no word on whether the K800 will see an update to Android 4.0 yet though.

Apparently the Lenovo K800 shown was running on the AT&T 3G network and is compatible with WCDMA and HSPA+, but there’s no word on whether there will be an LTE enabled model, and that the Lenovo K800 will launch first in China.

Obviously no word on just how much the K800 will hit the pocket for or just when it will be released. So with all that said and done all you need do now is head on down to mash that play button to check out the first Intel powered smartphone…enjoy. 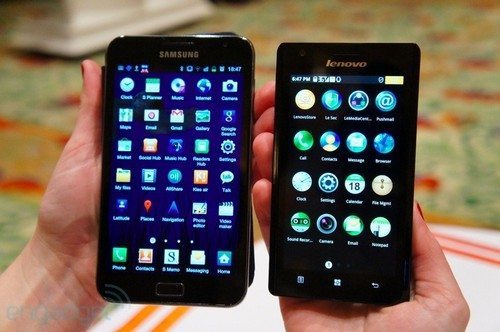