According to the guys over on Mobile Syrup, Telus is now teasing potential Lumia 800 customers with a “coming soon” page, so those potential customer know that the deice will come out to play with them eventually.

Apparently according to the guys the Nokia Lumia 710 will be release by Rogers sometime in February, but when it comes to the Nokia Lumia 800 on Telus, there is no hard word on just when the handset will release.

There’s also no word on what the Nokia Lumia 800 will hit your pocket for from Telus at this time, but at least now your know for sure that the Windows Phone will be coming your way.

So just in case you have forgotten, the Lumia 800 offers a 1.4Ghz processor, Windows Phone Mango operating system, 3.7-inch ClearBlack AMOLED curved touch screen, 16GB onboard storage, f/2.2 Carl Zeiss lens, rear camera but not to sure on megapixel, it will also come with many mobile apps such as ESPN Sports hub, turn-by-turn voice navigation via Nokia Drive and Nokia Music, Zune, Xbox Live and SkyDrive online storage. 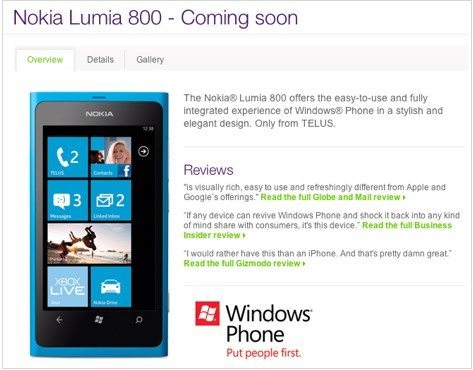