Over in the great white space of Canada, the Samsung Galaxy Nexus has been offered by both Rogers and Fido since the 10th of the month however the official release date for the Canadian Galaxy Nexus is apparently today the 13th of January, and Rogers now has the device listed online, but with slightly revised price plans.

According to the guys over at Mobile Syrup, the changes to the Galaxy Nexus price plans are marked in red on the image(below), and whilst the Samsung Galaxy Nexus outright price is $599.99, the no term/no month-to-month, and one year plans are now $574.99.

So there you have it if you want to get your fix of Android 4.0 goodness with the Samsung Galaxy Nexus on Rogers those are now the prices and you should be about to pick up the device officially as of today. 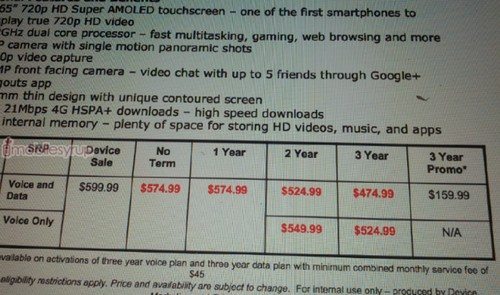