Must have CydiaBulletin for instant Cydia update notifications

There has always been the question of receiving notifications within the iOS ‘Notification Center’ when Cydia apps have been updated; well this is all now possible with the new “CydiaBulletin”.

The new CydiaBulletin, which is still being worked on, will allow users to receive instant update notifications when tweaks or jailbreak apps have received an update, which means you will never miss them.

Thanks to jailbreak developer Ryan Petrich he has been developing CydiaBulletin the Notification Center tweak. The screenshot below clearly shows a notification saying that there is a new version of Activator that is available in the Cydia Store.

This is brilliant news for those that have been waiting for this type of tweak, this is still being worked on and no exact release date has been given at this time. iDB believe that this little beauty will be released after the A5 untethered jailbreak is publicly released.

Please do let us know what you think of the new CydiaBulletin? Kind of exciting isn’t it? 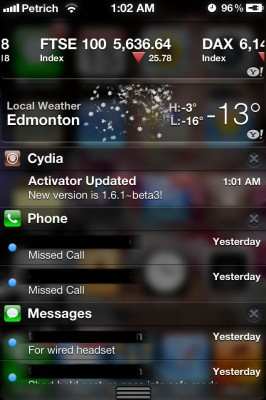