During CES 2012 the big news from Sony was the newly announced Sony Xperia S smartphone, a device we have already covered, but when can those Android faithful over here in the United Kingdom expect to be able to get their hands on the Android smartphone?

Well apparently the Sony Xperia S is available to pre-order unlocked and SIM free as of right now from Clove with a price tag of Â£467.99 VAT inclusive and has an expected first stock availability date of the 5th of March.

The Sony Xperia S is the first official Android 2.3. Gingerbread handset to come out under the Sony brand as it is expected the device will see an update to Android Ice Cream Sandwich in early Q2.

Clove has also confirmed price on several Sony Xperia S Smart accessories such as the Sony Smart wireless headset for Â£69.99, Sony SmartWatch commanding a price tag of Â£69.99 and others which can be viewed by hitting up HERE.

The Sony Xperia S also known as the Nozomi, offers the user, a 4.3-inch 1280 x 720 “Reality Display” along with a 12 megapixel camera with Exmore R sensor, 720p video, 1.3 megapixel front facing camera, 1.5GHz Snapdragon processor, Mobile Bravia Engine, HDLNA and HDMI capability and a 1900mAh battery, and a unique clear bar below the display where the antenna and home, back and menu buttons are housed.

So there you go, if you are in the market for an unlocked and SIM free Sony Xperia S you should be able to pick one up in March, will any of our UK readers be purchasing this from Clove? 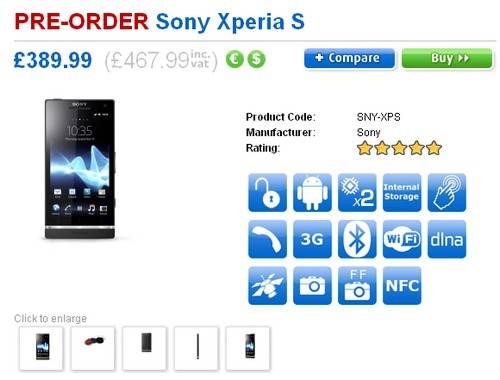 3 thoughts on “Sony Xperia S price and availability via Clove”