For some reason in the smartphone space, white seems to be a highly favourable colour for customers, with many smartphone makers pushing out a device with a white hue, and for those in the United Kingdom who would like to own the white version of the Motorola Droid RAZR, you might just like to know you can now put in your pre-order for the Droid RAZR wearing its white jacket.

Apparently although there is now hard and fast exact date when the UK Android faithful would be able to get their hands on the device, the white Motorola Droid RAZR is apparently expected to become available in the UK sometime mid to late February.

Obviously the white version of the Droid RAZR still has the same specifications as the black version so you’ll get a 4.3-inch qHD Super AMOLED Advanced touch screen along with a 1.2GHz dual core processor, 1GB RAM, 16GB internal flash memory and a 16GB memory card included and all wrapped up nicely in that white jacket.

For those in the United Kingdom that wish to pre-order the white Motorola Droid RAZR commanding a price tag of Â£430.80 you can do so by hitting up Clove, who are also offering a bonus incentive by throwing in a set of Motorola EQ3 speakers that would normally cost 20 quid for free.

So do you prefer your smartphone in white and if so will you be placing a pre-order for the white version of the Motorola Droid RAZR and those free speakers? 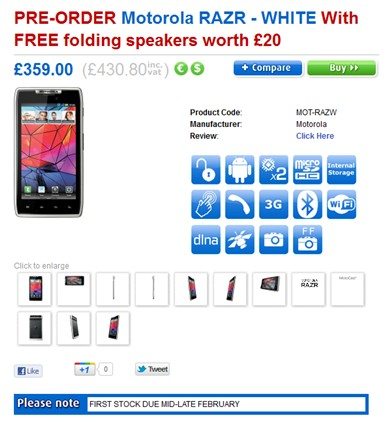