Not too long ago Motorola and Verizon officially announced the latest smartphone in the Droid family, the successor to the Droid 3 the aptly named Motorola Droid 4 and soon after that official announcement, the pricing on the Motorola Droid 3 tumbled down to a cool $99, and now apparently the Droid 3 price has been slashed yet again.

According to the guys over at Droid-life, Verizon has now chopped the price of the Android 2.3 Gingerbread Motorola Droid 3 down to a very attractive $50, but that low price only holds until the 5th of February, so if you want to take advantage you’d better get a move on.

As this is the second time Verizon has chopped the price on the Droid 3 the speculation is that the release of the Motorola Droid 4 can’t be too far off and brings to the game a 4-inch qHD touch screen, 5-row slide out QWERTY keyboard, 8 megapixel rear facing camera, front facing camera, 1.2GHz dual core processor, 16GB built in storage, microSD expansion up to 32GB, and of course 4G LTE connectivity. 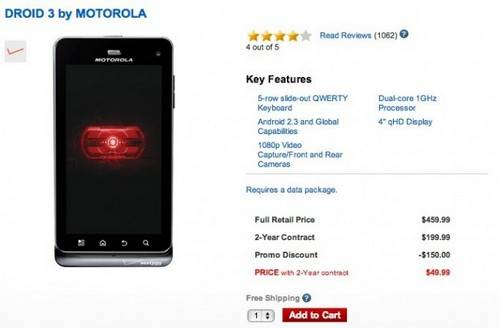