Are you one for showing your devotion to a mobile operating system by collecting collectables? We’ve seen some cute collectables of the Android robot before, and apparently there are another three available for the fervent collector in the form of Chinese New Year Android collectables that are apparently so collectable they sold out in a matter of minutes.

According to the guys over at Droid-life, the maker Dead Zebra put the Android themed Chinese New Year Gods up for purchase and was inundated with purchases that the collectables are now sold out, so if you want one or all three you have a bit of a wait ahead.

According to the guys the 3 traditional Chinese New Year Gods are some of the companies finest to be released yet, and offer even more detail than found on some action figures.

The collection is called the Android Mini Special Edition 3 Gods, and of course feature three mini Androids based on the figures of the Chinese New Year and limited to one set per household and each figure comes in its own box.

So we’d love to hear from out Android toting readers out there and if they purchased any of these collectables, or any other collectables, or if there are any other Android accessories that are sought after and worth collecting. So feel free to let us know by dropping us a line to our comments area below. 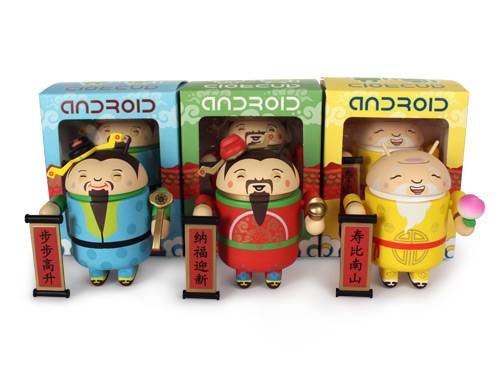