The Pleco Chinese Dictionary app for Android integrates a Chinese dictionary with a document reader and flashcard system with full screen handwriting input along with live camera based character look-ups.

The Pleco Chinese Dictionary app offers such features as two dictionaries that between them offer 130,000 words along with 20,0000 example sentences with Pinyin along with eight other dictionaries being available as an upgrade.

Pleco Chinese Dictionary for Android also delivers a live optical character recogniser that allows the user to look up words by positioning you camera at the character or by scrolling around an image although this is a paid add-on.

Mainland and Taiwan friendly the app supports both traditional and simplified characters along with supporting Zhuyin and Pinyin for pronunciation display.

Pleco Chinese Dictionary for Android is also tablet friendly although not full Honeycomb or Android Ice Cream Sandwich just yet, but offers a 2-panel mode that is just right for slates whilst the main interface has been tweaked to suit 7 and 10-inch displays.

For those that wish to take advantage of what the Pleco Chinese Dictionary app for Android has to offer they can download the application to their chosen device for free by hitting up the Android Market. 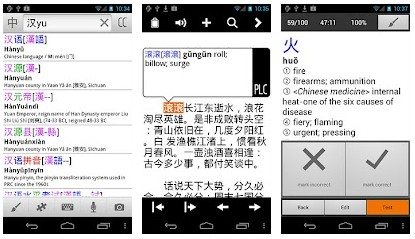