Word is some nosy bugger has been sniffing around old Samsung’s collection of UAProf files for their handsets and came across the model SGH-T999 that was published recently and apparently this discovery has lead to quite some speculation about which high end T-Mobile destined Android smartphone.

They say that not long after they identified the Galaxy S Blaze 4G, T-mobile officially announced the handset and outed the specs for the Samsung Galaxy S Blaze 4G, which are a Super AMOLED 720p touch screen along with 1.5GHz dual core processor and HSPA+ 42Mbps radio.

The TmoNews guys give a bit of reasoning on how the model naming works the T obviously means T-Mobile and 9 at the end shows it’s a T-mobile variant same as the Samsung Galaxy S2 was the SGH-T989, and typically that T9x9 is reserved for high end handsets and that the SGH-T999 will be the highest model number ever to be sold by T-Mobile.

So basically the general consensus is that the SGH-T999 could possibly be the Samsung Galaxy S Blaze 4G although just when the Android handset will come out to play remains a bit of mystery with T-Mobile only saying “later in the year.” 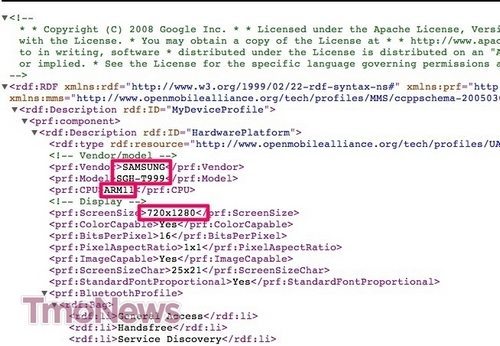