OTA RootKeeper to back up your root

OTA RootKeeper for Android will make a backup or protected backup of your Android device’s root although it will not root your device and thus your handset or tablet must already be rooted, and if certain conditions are matched will make root survive OTAs with the exception of system partition formatting.

Requirements are: /system partition as Ext2, Ext3, or EXT4.

In most cases the OTA RootKeeper app shouldn’t interfere with an OTA update process itself, and a bonus feature allows the user to un-root a device whilst keeping a su backup and thus you can natively hide root until you opt to restore it.

Judging by the comments on the Market it appears that OTA RootKeeper does what it says it does and is a very easy application to use and has already gained 191 5-star user ratings.

So if you’d like to give the OTA RootKeeper app for Android a whirl you can download the app to your chosen Android device for free by hitting up the Android Market. 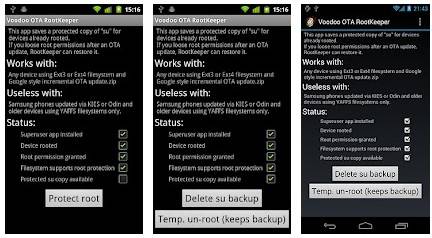 3 thoughts on “OTA RootKeeper to back up your root”