For the iOS faithful over in Japan, you will soon be able to watch and record digital TV on your iPhone, iPod Touch and Apple iPad as Logitech Japan will be delivering a One-Seg tuner for iOS devices by the middle of this month, although apparently the Logitech One-Seg tuner LDT-1Sio1 is not currently supported by the iPhone 4S.

According to an article over on Fareast Gizmos, Logitech Japan has officially announced the One-Seg tuner LDT-1Sio1 for iOS devices, which is slim and compact and includes a built in retractable antenna that can be easily positioned to gain a good reception.

Measuring 57.4 x 10 x 23mm and weighing in at roughly 12 grams, the Logitech One-Seg tuner LDT-1Sio1 is a “Made for iPod/iPhone/iPad” accessory and features a microUSB cable so the user can charge their iOS device whilst enjoying a One-Seg broadcast.

Simply connect the Logitech One-Seg tuner LDT-1Sio1 to your iDevice dock and you can enjoy digital TV and will have the ability to switch on/off subtitles when viewing or recording programmes, although if you happen to receive an incoming call whilst recording the recording will be cancelled.

The word is as mentioned above, the Logitech One-Seg tuner LDT-1Sio1 for the iPhone, iPod Touch and Apple iPad should become available in Japan mid-February and will command a price tag of roughly 7980 yen, which is about US$103. 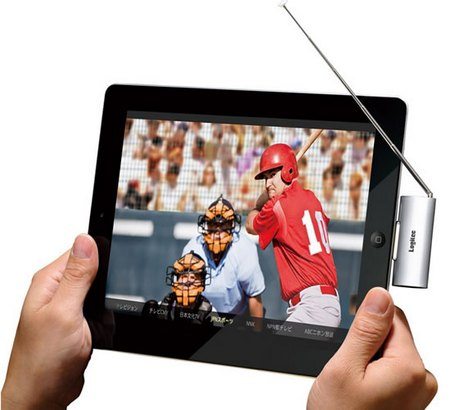