The word is LG has a new Tegra 3 Android Ice Cream Sandwich packing smartphone up their sleeve and will be showing it off at Mobile World Congress 2012 in Barcelona in a couple of week’s time and the device is their new flagship Tegra 3 smartphone called the LG X3 (P880) smartphone, and today we have a few LG X3 specs to share.

The specification for the LG X3 comes our way courtesy of the guys over at android.modaco, who gain the specs via an unnamed tipster, and along with said spec they have a couple of LG X3 screenshot, which you will find below.

So here’s what spec that tipster came forth with…the LG X3 will sport a 4.7-inch 1280 x 720 HD touch screen along with Tegra 3 quad core process that delivers 1.5Ghz on single core and 1.4GHz on 2/4 cores, along with SMP core for IDLE task ops that conserve battery life.

The LG X3 will of course be an Android Ice Cream Sandwich smartphone and have an 8 megapixel rear facing camera along with an ultra-fast shutter, and a 1.3 megapixel front facing camera, 16GB internal memory, microSD expansion slot and a 2000mAh battery.

According to the guys judging by the screenshots, the LG X3 is benching at a cool 4412 in ‘new Quadrant’ and will indeed run Android 4.0.3 but with the latest release from NVIDIA the 2.6.39 kernel.

So there you have what spec on the LG X3 are known so far, albeit of course not being confirmed, but it wont be too long before MWC 2012 kicks off, so we should lean more then. 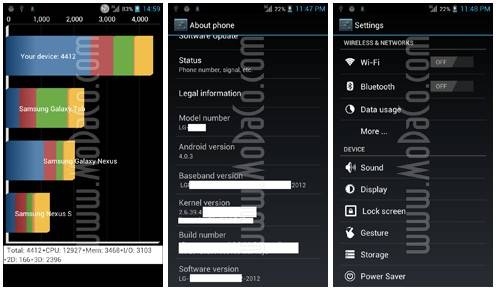