Yes folks its time once again to pit Android smartphone against Android smartphone in a comparison video fight where the fir Android Ice Cream sandwich smartphone, the Samsung Galaxy Nexus takes on newcomer the Android 2.3 Gingerbread packing Motorola Droid 4 to battle it out to see if one can top the other and gain victory.

The Motorola Droid 4 versus the Samsung Galaxy Nexus comparison video comes our way courtesy of the guys over at Phone Arena who put together this little comparison fight lasting just over eight minutes, ad of course have done an in-depth written comparison that can be read on their website.

So as usual with these types of things we’ll kick off with a specs comparison and then let you head on down to hit that play button and check out the footage.

The Samsung Galaxy Nexus sports a 4.65-inch qHD Super AMOLED display whilst the Motorola Droid 4 packs a 4-inch qHD LCD display and the guys say when the lights are down it’s safe to say the Galaxy Nexus has the superior display.

Whilst both Android smartphones feature a 1.2GHz Cortex-A9 dual core processor, 1GB of RAM, 16GB of internal storage, although the Motorola Droid 4 does feature microSD expansion up to 32GB while the Galaxy Nexus doesn’t, but the Nexus does come with a better OS Android Ice Cream Sandwich.

Anyway, I’ll halt right there as I have no wish to spoil your viewing enjoyment so I’ll let you head on down to mash that play button to see if the Samsung Galaxy Nexus can best the Motorola Droid 4 or visa versa…enjoy. 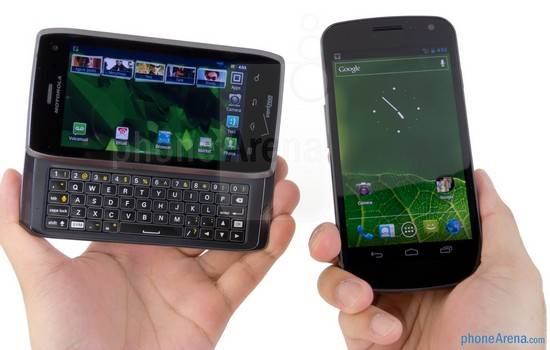 One thought on “Galaxy Nexus vs Droid 4 comparison video”