We’re only days away now from Mobile World Congress 2012 but already many new smartphones are leaking out ahead of their official unveilings. The highlights of MWC this year are likely to be quad-core devices and now some images of a Huawei phone have emerged that could be another quad-core beauty, the Huawei Ascend D1 Q.

It looks very much as though the Ascend D1 Q could be Huawei’s next flagship Android smartphone and the images that have made their way to the light of day show a decent-looking phone with curves in all the right places accented with some red color detail on the camera unit and speaker grille.

Engadget points out that this Ascend D1 Q does not have the slimline form factor of Huawei’s P1 series and is rumored to be quad-core, hence the Q in its title. The D apparently signifies that it’s in Huawei’s Diamond line. There’s not a whole let else known at the moment although as we said previously it’s likely we’ll be hearing much more about the Ascend D1 Q from MWC in Barcelona where Huawei is holding a press event on February 26.

Talk is that a release of the high-end Ascend D1 Q looks likely for April according to Netbook News, sourced from imobile.com.cn. This phone certainly looks to be a cut above the usual offering from Huawei and could be a real breakthrough, seeing the company compete viably in the premium market. We’ll be sure to let you know more about the Ascend D1 Q as soon as we hear more.

What are your initial thoughts on the Huawei Ascend D1 Q? Do you like the styling and what might possibly make you choose this handset over a different quad-core smartphone? Send your comments to let us know. 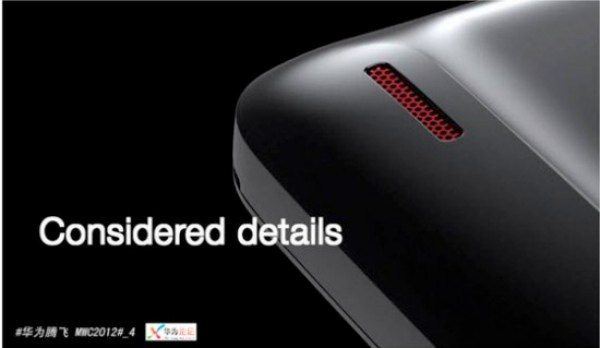