If you are a fan of the Daytona 500 and would like to locate each activity on an interactive map on your smartphone you might like to know that both Android and iOS now have the Daytona International Speedway app available to download to your Android or iOS device.

According to the guys over at Mobile Sports Report, the Daytona International Speedway (DIS) have been working to expand the sports appeal to social media users and as such have launched several programs including an app for Android devices and an app for the iPhone, iPod Touch and Apple iPad.

The Daytona International Speedway app for iOS and Android enables the user to track a wide range of events along with new articles whilst if you are at the race you will receive basic info on such stuff as gate policies, directions, daily schedules and such.

The Daytona International Speedway app also has an interactive GPS facility along with parking maps with search abilities, and a feature known as “Friend Finder” that lets you locate your friends at various events.

Furthermore, according to the guys there will be QR codes prominently locates around the track that connect to the Daytona International Speedway app and a special QR code that the user can use to enter a sweepstake with NASCAR.com to gain a chance of winning tickets to Daytona 500 2013.

For the iOS speedway fan that would like to take advantage of the Daytona International Speedway app you can download the app to your ioS device by hitting up iTunes and if you are on the Android platform you can do the same by hitting up the Android Market, both mobile apps are free downloads. 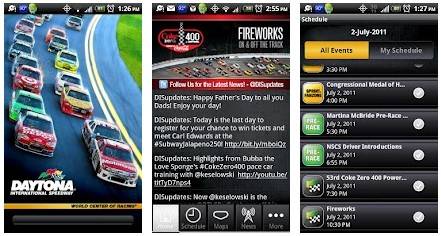