New smartphones are being released like hot cakes at the moment, but none of them have really gone back in time. Say hello to the M3 Android NFC Communicator, a phone that steps back in time that adds a little pinch of old with a snippet of new.

According to the guys over at Malaysia based DMD Mobile they will be unveiling a new Android smartphone during Mobile World Congress in Barcelona next week, a handset called the M3 Android NFC Communicator.

Apparently the M3 Android NFC Communicator is for the pre-paid market in the Middle East and South Asia, and mixes old and current specifications on two versions of the handset.

Those specs include a 2.6-inch QVGA landscape capacitive multi-touch touch screen, candy-bar form factor with a QWERTY keyboard (looks a bit like a BlackBerry), and also come as a 3.2-inch HVGA touch screen only model.

Apparently the M3 Android NFC Communicator will become available in the Malaysian market sometime in April and is targeted towards the affordable market segment commanding a price tag of RM500, which is roughly $165 US. 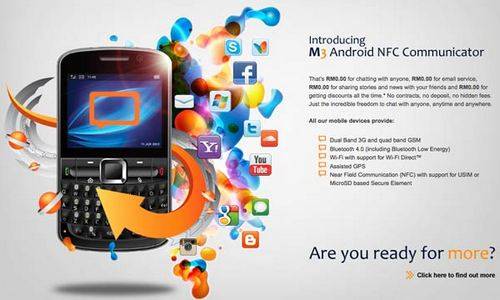