Tablet ICS 4.0 version for the Galaxy Nexus via ROM

Obviously the latest Android operating system, Android Ice Cream Sandwich has been designed to bridge the gap betwixt smartphone and tablet operating systems to deliver a single experience for both handsets and slates and was built to be able to scale no matter the screen size.

Well now according to an article over on Droid-life by way of Roozwiki, ROM developer Patrick has now come up with a ROM that can put the tablet ICS 4.0 version on the Samsung Galaxy Nexus.

Apparently though the phone.apk is somewhat struggling and at this moment in time does, work however apparently all else does although Patrick says he didn’t test it too thoroughly, but does confirm that the tablet navigation bar and navigation buttons do work well.

Obviously with a little help from the Android developer community out there eventually those problems with voice calls will get sorted at some point, as let’s be real honest here having the Galaxy Nexus running the tablet version of Android Ice Cream Sandwich but unable to make a call make the handset a bit defunct as a phone.

However, I know there are those out there that simply can’t resist tinkering with their smartphone, so if you would like to give it a whirl on your Samsung Galaxy Nexus you can grab all the necessary by hitting up Rootzwiki, and of course feel free to let us know how it all goes. 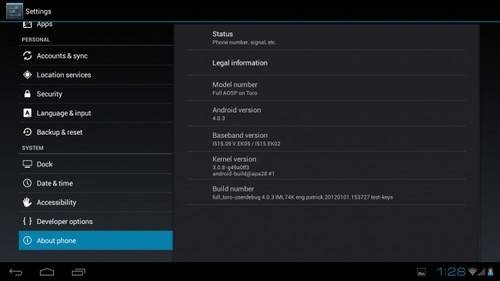 One thought on “Tablet ICS 4.0 version for the Galaxy Nexus via ROM”