As I am sure most know, there is always a bit of rivalry between the mobile platforms as to which platform is the fastest, we have seen numerous video speed tests in the past of various devices, usually Android handsets pitted against the iPhone, but could it be that Windows Phone is actually faster than both the iPhone and Android?

Well Microsoft would have you believe so, and as such has posted a video to their Facebook page which comes our way courtesy of the guys over at Mashable, and challenges Windows Phone is faster than customers rival devices, and the bet is 100-bucks.

This latest challenge by Windows Phone includes such stuff as snapping a picture and posting to Facebook, locating directions to a nearby restaurant, and includes a Twitter campaign with the hashtag #SmokedByWindowsPhone.

In the campaign video the Windows Phone toting guys takes on such rival devices across numerous videos, as the iPhone 4S, and numerous Android smartphones including the Samsung Galaxy S2, HTC EVO 3D, and Samsung Galaxy Nexus.

Of course we have a couple of those Windows Phone challenge videos for your viewing pleasure below in which Windows Phone seems to prove that a Windows Phone devices is simply faster than rival devices at the everyday stuff they do on their smartphone.

So I’ll leave it right there and let you head on down to mash those play buttons and check out the Windows Phone challenge videos, which no doubt will cause a bit of an online debate, so feel free to let us know if you believe Windows Phone is the fastest by posting to our comments area below…enjoy. 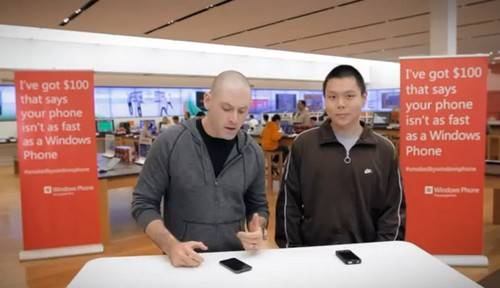