As you are no doubt aware the latest smartphone to come out of the HTC camp was shown off during Mobile World Congress 2012 and is the HTC One X and Android Ice Cream Sandwich device and part of HTC’s new One range of devices. However when the HTC One X goes stateside it will apparently be known as the HTC One XL.

And according to an article over on An.droid Life, although the international model of the Android handset packs a Tegra 3 quad core processor, the US model that is heading for AT&T will sport a dual core Snapdragon S4 processor as it can support 4G LTE.

As for when the United States will be able to get their mitts on the HTC One XL, the word was the smartphone would arrive sometime in April; however apparently if you are over in the good old US of A you can slap in a pre-order for the Android device right now.

As for specs the HTC One XL will pack the same as the HTC One X apart from that processor switch of course so will come out to play with Android Ice Cream Sandwich, 4.7-inch HD 720p touch screen, 8 megapixel and 1.3 megapixel cameras and so on.

So the big question is will any of out American readers be hitting up Best Buy to place a pre-order for the HTC One XL on AT&T? 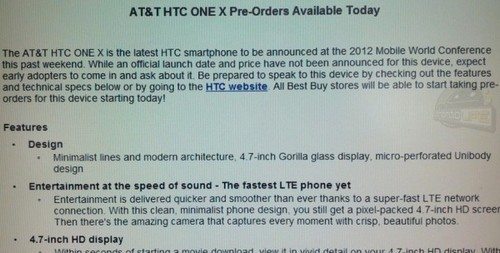