iPad 3 concept video, will the next Apple slate look this awesome

I’m sure everyone in the mobile space is aware that the word is Apple will deliver the next generation iOS tablet fairly soon, but although we have heard rumours of what the Apple iPad 3 will look like an doffer nothing is concrete until such times as Apple unveils the slate, but will the next Apple tablet be as awesome as this iPad 3 concept video we have for your viewing consideration below?

The iPad 3 concept features video comes our way courtesy of the guys over at Ubergizmo and by way of Aatma Studios and delivers just over a minute of awesome Apple iPad 3 concept sweetness.

The iPad 3 concept shows us such things as an edge to edge Retina Display, and thus seeing the disappearance for that wide bezel, a 3D multiplayer hologram, and advanced Near Field Communication (NFC).

However with such iOS features one would no see the tablet’s battery drain rather rapidly unless Apple could come up with a longer lasting battery for their iOS slates.

According to the Ubergizmo guys, advanced NFC works for instant having a couple of iPad tablets come into contact which will enable their internal magnets to be joined smoothly and the host tablet will immediately take over and extend to the secondary iPad display thus delivering a dual display.

Anyway I’ll leave it right there and let you head on down to mash that play button and check out this awesome Apple iPad 3 concept for yourself, but if the real iPad 3 was to be like this it would certainly fly off shelves don’t you agree? 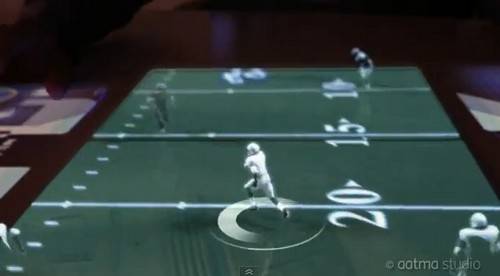