As you are probably aware Apple has dished out their invites for the Apple iPad 3 media event that is to be held in San Francisco next week on Wednesday the 7th of March, the invite mentions that Apple has something in store you have to see and touch, but will Apple deliver a totally new Apple iPad 3 or just an updated Apple iPad 2?

Well according to the guys over at iDownload Blog the invite image (below) gives out a few clues on what one could possibly expect and as such deciphered said clues and kick off with the 3 icons, the maps app shows Apple’s HQ One Infinite Loop, the calendar icon shows that Wednesday 7th date and the obvious Keynote app.

The guys then move onto the image of the Apple iPad, which is presumed to be the Apple iPad 3 but as the image is low resolution and in close up it is somewhat difficult to tell, and could be a tablet very similar to the current Apple iPad 2, although some have stated that there is a lack of a home button, which has previously been rumoured on the iPad 3.

However the guys say it’s more likely that Apple has simply turned the slate on its side to keep the image smooth and don’t think it is plausible to lose the home button. Of course even now it is still only a guessing game when it comes to the Apple iPad 3.

Readers have commented on the article and given their thought on that Apple invite statement, some thinking the “see” bit could suggest iTV, whilst others think the “touch” bit could refer to the iPad 3 Retina Display.

So we’d like to hear our readers opinions on this Apple event invite, do you think Apple will deliver a whole new iPad 3 or an upgraded iPad2, will it sport a home button or not, could the “see” mean iTV and “touch” mean a Retina Display or have you come to your own conclusions on the matter? 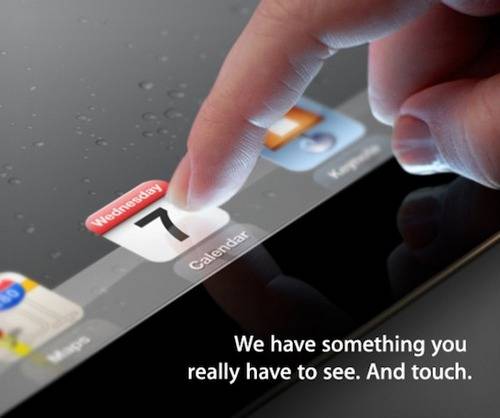