New app to help blind with Voice Over

If you happen to have a bit of a problem with your sight and finding it a tad difficult to recognise objects, if you own an iPhone there is a new app available that could help with that problem. The new iOS app is called LookTel Recognizer, and enables the visually impaired user to identify objects such as ID cards, DVDs, packages and more.

According to an article over on Gadgets And Technology News, the LookTel Recognizer app for iOS devices helps the visually impaired to recognise objects simply by pointing their iPhone camera at the object in question and the iOS smartphone will tell them what that object is.

Apparently when using the LookTel Recognizer app recognition is done in real time so there isn’t any need to snap a picture of the object and along with everyday objects such as groceries, and the like the app can also identify locations like office and store entrances and the entrance to a home.

With the LookTel Recognizer app for iOS you do need to train the tech though but it is fairly simple, users build up an item database by capturing an image of the item and recording a description to that item, so probably those who are visually impaired could get a friend to build up their database.

Once your database is created those items will be immediately recognised when you point the camera at it, and your database can also be exported via email so you can share with others, and you can also backup your database.

For those on the iOS platform that suffer from sight recognition problems and would like to give the LookTel Recongizer app a whilst you can download the app to your device at a cost of $9.99 from iTunes, and we have a quick video of the app in action for your viewing consideration below…enjoy. 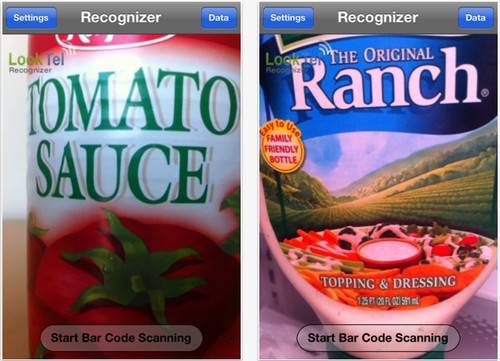