As you are no doubt aware it is expected that the next iOS slate out of the Apple camp is to land this Wednesday and everything will be revealed about the Apple iPad 3. However if you fancy having a butchers at some claimed iPad 3 parts so you can get an idea what the iPad 3 will look like we have a video of those iPad 3 parts for your viewing consideration below.

The Everything about iPad 3 video comes our way courtesy of the guys over at Mic Gadgets, who claim to have managed to get hold of some parts of the Apple iPad 3 and have gone hands-on in the video footage below.

The iPad 3 parts seen in the footage are said to be the front glass of the iOS slate, the rear shell and cases, and they can confirm that the Apple iPad 3 will indeed come with a home button and not lacking one as recent rumour stated.

They also confirm that the iPad 3 is the same as the Apple iPad 2 when it comes to memory so will be 16GB, 23GB and 64GB and that there will be no increase in pricing which they say is probably due to the Apple iPad 3 not sporting 4G LTE as speculated.

Anyway as I have no wish to spoil you viewing enjoyment of the video I’ll leave it right there and let you head on down to mash that play button, and you can also check out an in=mage of those iPad 3 cases below…enjoy. 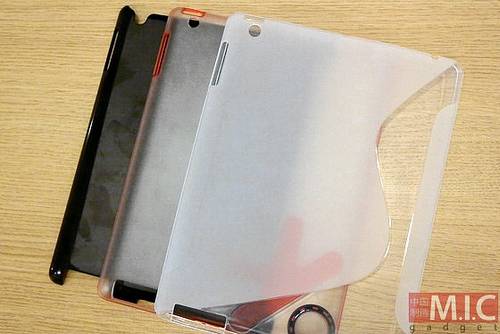 One thought on “Apple iPad 3 parts close up on video”