If you happen to own a netbook, but would rather have it running an Android tablet interface there is now apparently a way you can do so, and that way is via the Android x86 project that is apparently currently optimised for the Asus Eee PC along with other compatible builds including iOS, and is now available in Android Ice Cream Sandwich flavour as well.

According to Android Rundown, the Android x86 project files can be installed to a USB drive, which can then be booted from, and it is apparently possible to run as a live distribution or install to a disk, and can exist alongside Windows without reformatting.

The guys say that once the OS is booted up, Android is perfectly usable on netbooks due to the built in mouse, and keyboard support in the operating system although they do say using a trackpad can be a tad awkward when scrolling.

The guys went hands on with Android x86, and say that some apps handle keyboard navigation quite well, and the camera works albeit the shutter speed being a tad slow on an Asus Eee PC netbook, whilst system keys such as volume and brightness have been integrated into the Android build.

They say that battery life wasn’t improved but hard drive seeking was “noticeably decreased,” whilst screen locking worked albeit a glitch where the power button needs to be pressed while the netbook is resumed, and the screen faded in order to unlock the device.

So for those that own a netbook and are a tad curious at what an Android tablet interface would look like on your netbook, and have a play with it you can follow the instructions on how to do so by hitting up the Android-x86 website. 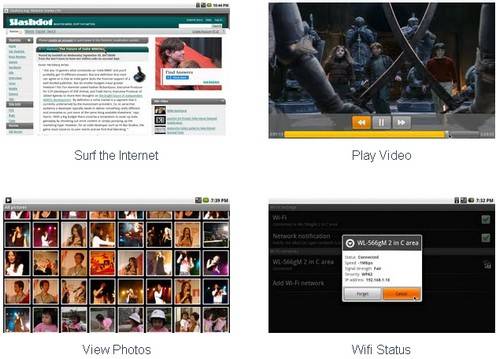