We like to keep you informed about some of the many new mobile apps available and if you’re a Disney fan you’ll certainly appreciate this new app, Disney Mobile Magic, for both iOS and Android. It was unveiled by Disney last week and concentrates on Disney parks in California or Florida, offering the user a great way of planning their park days.

The exact system that is used for FastPasses and wait times in the parks is used for the Disney Mobile Magic app enabling users of the app to see wait times and return times from the FastPass service on their mobiles. This will allow the user to make the most of every moment in the park. There’s a GPS-enabled map to see where to head to next and wait times are shown as See Now, Moderate and High Demand, according to this report.

You can also mark certain Disney attractions as your favorites for future visits and the app includes park opening and closing times and also those times for the water parks. Other features of the app include being able to set reminders for show times and parades, lists for character greet sessions and where they are taking place, shopping details and also weather for your visit. There’s also further information on each individual attraction and you can even book your dining occasions using the Mobile Magic app as well as referencing your Disney hotel if you’re staying at the resort.

Another clever addition is that when a guest actually visits a Disney park some more information can be unlocked and there are enhanced features for the app. If you’re a Verizon subscriber it gets even better as you’ll have access to videos, games and premium features. The app is free for Android or iOS devices and you can download the iOS Disney Mobile Magic app for iPhone here, or the Android app here. You can see a screenshot below to get a taster of the app.

Will you be downloading the Disney Mobile Magic app to make the most of your next visit to a Disney Park? What other features do you think Disney could add to make the app even better. 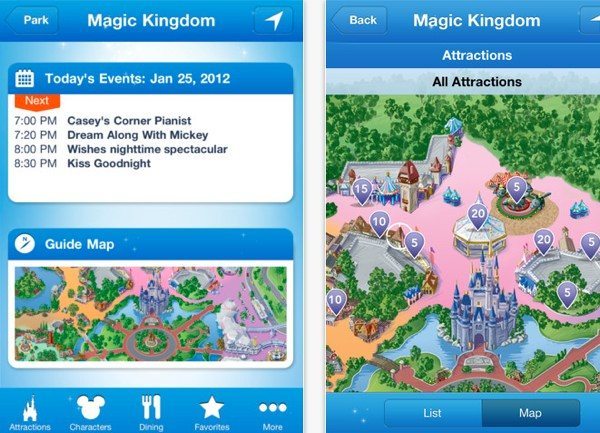