If you have small children and wish to keep them entertained and own an iOS tablet there is now an iPad app available that is an entertaining interactive children’s musical picture book, and is called Who Stole the Moon? A fairytale written by Brit author Helen Stratton-Wood and illustrated by Russian artist Vlad Gerasimov.

WindyPress has taken an innovative step with the Who Stole the Moon? app by creating a new digital publishing genre, the e-musical. The fairytale Who Stole the Moon? centres around little Bertie, who dreams of becoming an astronaut, and one evening when looking out his window saw that the moon had gone, and sets about playing detective to find out who stole the moon.

With the Who Stole the Moon? app for the Apple iPad your child can join little Bertie on his quest and includes vivid animations, fine illustrations, eight original songs performed by award-winning American children’s singer Susie Tailman and Australian musician Richard Pleasance, and even 4-mini games.

The Who Stole the Moon? iOS app is interactive so you or your child can touch and drag stuff across the display and using headphones delivers the best audio experience. 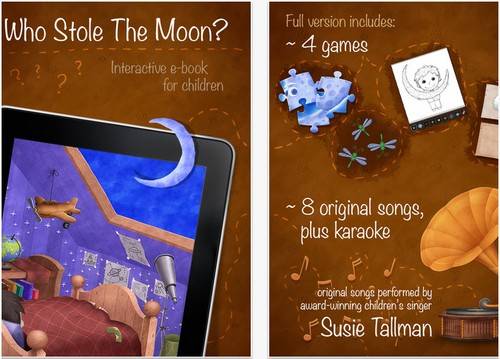 One thought on “Who Stole the Moon? Childrenâ€™s iPad interactive book”