Now that Apple has gone official with the ‘new iPad’, obviously the specs for a new iOS slate will get compared to rival tablets, and not wanting to be left lacking, it appears that old Sammy has begun fighting back at Apple by comparing the new iPad specs with their latest Android offering, the Samsung Galaxy Note 10.1.

According to the guys over at Android Community, Samsung has pushed out their own spec comparison chart comparing the Samsung Galaxy Note 10.1 tablet with the new iPad to show what they consider better over the new Apple iPad offering.

So what does Samsung say that has the Samsung Galaxy Note 10.1 a better offer than the new iPad? Well according to the comparison chart that you can view below, the Galaxy Note 10.1 can view 2 apps simultaneously, the ability to work with 2 apps side-by-side, the ability to write as you would with a pen/pencil and paper, precision photo and image editing, ability to take notes in one app whilst seeing content in another app, and cut and paste between two apps.

Of course Samsung says that the new iPad can’t do any of the above, and also mentions that the Android packing Galaxy Note 10.1 is thinner and lighter than Apple’s latest slate. 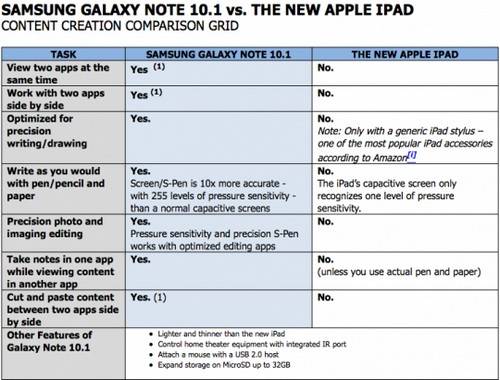